One of my favorite plays when I played major league baseball was sliding into a base. Choosing the correct sliding technique and direction based on the play at hand took skill that is not as easy as it may appear. Developing major league sliding instincts requires a good amount of concentration, often missing with players. 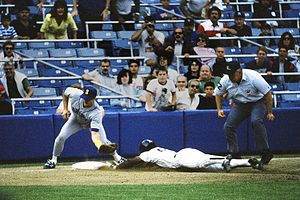 Some ballplayers have a knack for sliding, whereas others do not have good sliding instincts. For all players, sliding, like all aspects of baseball, is a skill that requires practice. There are different major league sliding techniques available to runners with the best technique determined by the play and/or direction of the throw.